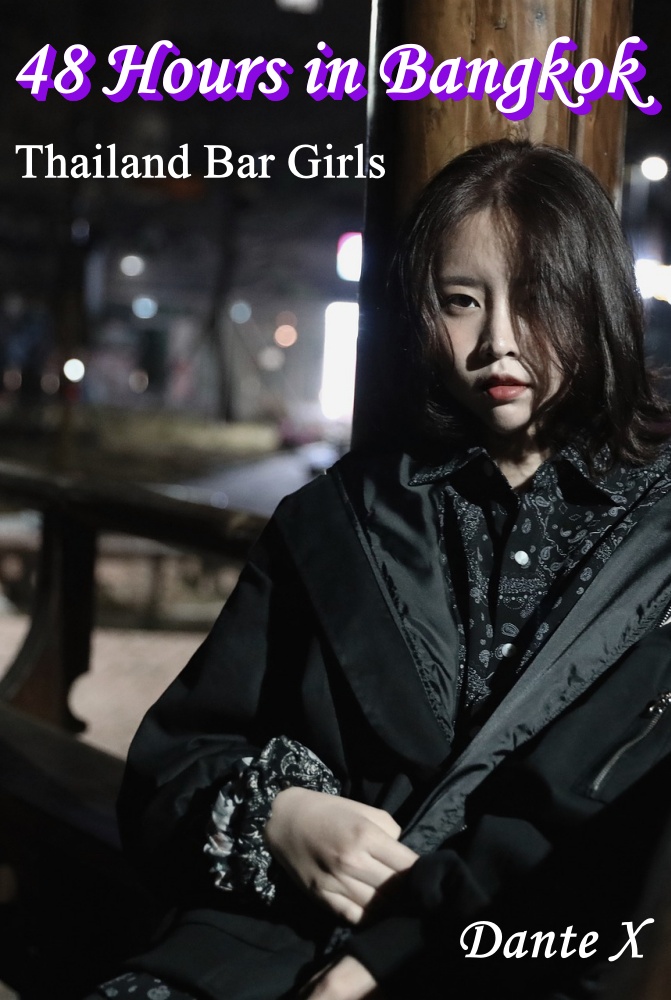 This story is about what happened within the first 48 hours of returning to Bangkok. Only the individuals names have been changed to protect their real identities. All events revolve around specific girls and bar areas like the German Beer Garden in Sukhumvit Soi 5, The Nana Plaza and Soi Cowboy to name a few.

This story is about what happened within the first 48 hours of arrival in Bangkok. It was about six months previous to meeting Mindy in my other book entitled “Naughty Adventures with an Asian Sex Wife – Bar Girls in the UK.”

Only the individuals names have been changed to protect their real identities.

I was only away from Thailand for a few months as I had to pop back to the good old UK to sort a few things out. But as soon as I exited the taxi in Sukhumvit Soi 5 by Food-land, I bumped into Tuk. Now Tuk was one of my regulars over the last year or so and the reason I went with her so often was because she was one of the dirtiest and naughtiest bar girls I’d ever met during my many years in the land of smiles.

It was only 11 o’clock in the morning and I was still carrying my travel holdall but she immediately asked me where I was staying? I told her I’d only just arrived from the airport and it was too early to check in, so she cheekily asked if I wanted to go to a short time hotel?

I was a little taken aback as it was so early but as I liked her a lot, I agreed and we jumped in a waiting taxi. The hotel was nothing special and offered short time rooms for 200 Baht per hour, no bedding just a bottom sheet, condom and two small towels.

Now Tuk was not the best looking girl in the world but what turned me on was her skinny long legs and she had a really sexy little butt, she also had an amazing pair of tits and nipples but the only thing I found a little hard to deal with was her strong attitude, especially if she’d been drinking.

Now don’t get me wrong, she had a great personality but when she was upset about anything like a previous customer that wanted something unusual or didn’t pay, even I wanted to get away from her as fast as possible.

Anyway, one of the weird things about Tuk was, she’d always spend a good ten to fifteen minutes in the bathroom but when she came out she was all placid and more or less was like a different person, letting me do whatever I wanted. So on this occasion, I questioned her about it and she surprised me by saying, she has a Thai stick (Ganja) and by running hot shower it gets rid of the smoke. I was well impressed and told her I also liked Ganga and she should have told me we could have one together. But on this occasion, she collapsed on the bed and I now realised why she was so placid, she was stoned.

On the way to the short time hotel she was telling me how her last Arab customer wanted to fuck her in the arse and she told him she didn’t do that but he apparently offered her an extra 200 Baht…! I’d never tried her arse as she was like I said, quite skinny and her pussy and anus were pretty tight. I always liked to finger her anus as we were making love but assumed she wasn’t into arse fucking. Anyway, now I knew she was stoned and more or less letting me do whatever, I soon had her kneeling up on the bed with couple of fingers in her arse, probing away as she moaned and sighed. I suppose it was the thought of some big fat Arab guy fucking her in the arse that made me want to do it. She was absolutely loving it and when we ended up in a 69, she was doing the same to me.

It was still only 3 o’clock and most of the bars didn’t open until 5 or 6 PM, so after checking into the Maxim’s Inn Hotel in Soi 7/1, I decided to have a walk up to Robinson’s and have something to eat in the food court on the lower level below MC Donald’s. However I only managed to get halfway down the Soi when a beautiful young girl holding a massage sign and sitting on a tall bar stool waved at me smiling. Now usually I just ignore them as it happens all day long and one gets sick of saying No thanks all the time, but this little stunner looked new and had such a lovely smile. I decided to engage in conversation but soon found out she spoke virtually no English and all she could say was “Massage 300 Baht”. I said OK and she jumped off her stool all excited and led me into one of the five story buildings and up some stairs. A receptionist girl held out her hand and said 300 Baht, so I paid and followed the girl up another two flights of stairs into a room with three raised off the floor mattresses separated by white curtains. She handed me a towel and pointed towards another room which was a basic shower and toilet.

I’d already showered so basically striped off and walked out wearing the towel as she led me to the end mattress by the window. We were the only people in the room but she still pulled the curtain over and disappeared for a few minutes. When she returned she was wearing a silky white skirt and blouse and started giving me a massage. All was quite nice and normal for the first five or ten minutes but then I realised she was basically just stroking my arms and legs, rather than actually doing a proper Thai massage. Now I’d had hundreds of massages in Thailand and they usually leave it till the end before they start brushing against your cock or asking if you want a happy ending. But this girl was obviously very inexperienced and started asking the same old questions,

“John,” I always used that name as it was easy for me and them to pronounce.

“The Moon,” I replied pointing up at the sky.

This made her laugh so I asked her name in Thai and she told me it was Mai. And for whatever reason, she’d stopped massaging me and was basically running her hand up and down my arm as she gazed into my eyes. It was the strangest thing and then we heard another customer come in with another massage girl. They were literally two feet away on the next mattress with just a thin curtain between us. The other girl said something in Thai to my girl who replied but I had no idea what was said.

Next thing I knew was she was caressing my cock under the towel…! Now normally I push them away and tell them I only want a massage because I’ve had a few bad experienced in the past where after agreeing to the happy ending, it’s so clinical and over so fast that I’d much rather pick up a girl outside or in a bar and have an hour or sometimes all night for the same price of 500 Baht.

Anyway, she’s caressing my rapidly growing erection and never mentioned any money but because I really liked her innocence, I let her continue and put my hand up her skirt to have a feel of her butt. She didn’t push me away so delved in deeper and was rubbing between her legs as she started giggling and indicating to me to be quiet.

I was wondering what she was going to do if we had to be quiet but soon found out as she pulled my towel away and went down on me, sucking and fondling my balls. It was really strange as I could hear the girl massaging next to us trying to talk to her customer a German guy.

Her little pussy was so fucking wet I had two fingers inside her and she was writhing around trying to be quiet but then I pulled her on top of me so she was kneeling over my face. She tried to get off but I’d already pulled her knickers over and was licking and eating her hairy little snatch. God she was absolutely delicious and she soon stopped struggling and continued working on my cock. How the couple next to us didn’t hear the slurping noises was beyond me but I did hear them whispering and giggling so they probably did know what we were doing.

Suddenly the girl massaging the German guy said something to my girl and took him to another room. As we were now alone, I got her to take her knickers off and climb back on my face. She was absolutely loving it and so was I… I’d never known a girl get so wet so fast. I suppose we were at it for five or ten minutes before I managed to turn her around and sit on my cock. I didn’t have a condom and suspected she didn’t either but we were both so turned on, we fucked like a couple of new lovers trying to be quiet but she eventually orgasmed and held her hand over her mouth trying not to make any noise.