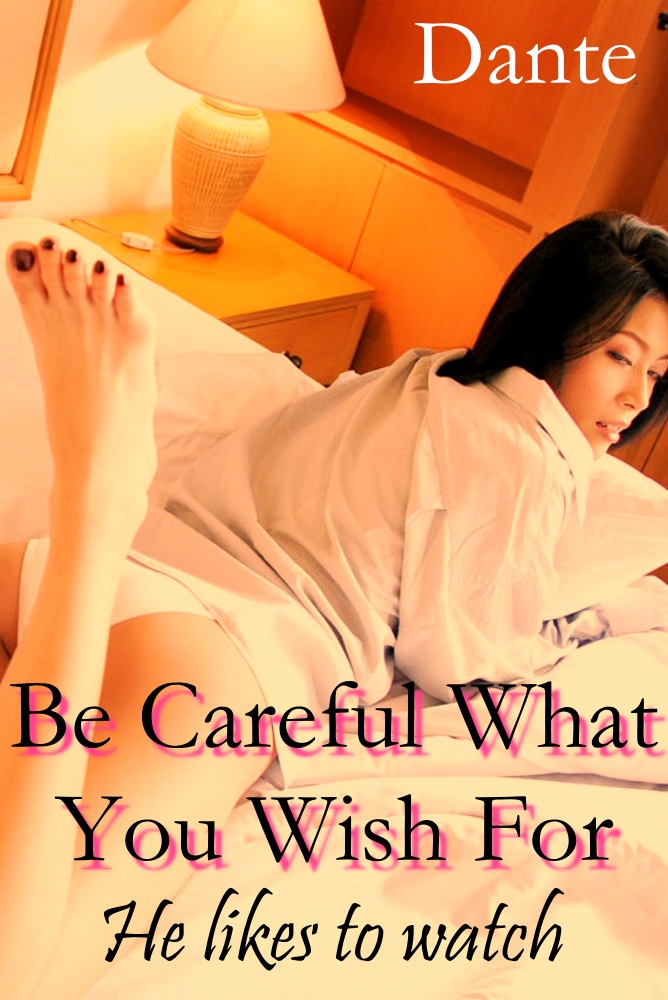 Be careful what you wish for – He likes to watch

Chapter 3 – Back at their flat

Chapter 6 – The car park in the woods

It all started at work when Matt came up to me in the club and asked me to help him out with his attractive Asian wife. I’m Lawrence and basically split up with my wife a few months ago, but that’s another long story so I’ll save it for another time. Both in our early forty’s and work in the home relocation industry.

Anyway, I was sitting in the club bar area and when Matt appeared and sat down next to me saying his wife had gone off to the rest rooms.

“Listen mate, I’ve been trying to get Lin to play in the club but she says she can’t…
I remember you saying you and your missus went through something similar at the beginning, any idea how I can get her interested…?”

“Well it was probably the sweets (molly) mate, she was as shy as fuck before we started coming to the clubs but as soon as she tried one she was like a totally different person.”

“Yeah I did tell her that most of the clubbers are on it, but she’s not interested… But I know she likes you and I was wondering if you’d… you know… see if you can get her to do anything.”

“Sorry mate… I’m not sure I get your meaning…!”

“Well, since you split up with Gail, she keeps asking questions about what happened and why you still come out to the clubs alone… I reckon she fancies you and she’s always trying to see what you get up to… We were watching you playing with that tall blond bird and her boyfriend last week and she was pretty turned on.”

“No mate… she said she was too embarrassed to do anything in front of me.”

“That’s a bit weird, so you want me to try and get her to play with me then…?”

“Yeah… But I’ll sort of disappear and watch from a distance.”

“So have you talked to her about this…?”

I’d only met Lin a few times and fancied her like crazy but it was a real surprise to hear Matt asking me to come on to her…! I’d always thought he was too jealous and didn’t want anyone to get too close to her. Quite tall and slim, Lin was a real looker, late twenties, Asian and born in Hong Kong, I think her real name was Li Jing but we all knew her as Lin. Spoke perfect English with sexy long legs and a butt to die for, shoulder length black hair and beautiful smallish pert breasts. I also remember her telling my ex wife Gail when we first met a couple of months ago, that she was studying Italian at college.

I’d had a couple of sweets earlier so was already feeling the effects and watched as Matt led her over to the play area. She was wearing high heels, a short white dress with black tights or stockings and he had his hand around her waist as they walked along. Following them into the crowd, I saw him touching her butt and slipping his hand up the back of her dress. It looked like she was wearing tights which always turned me on and I was wearing my black leather shorts with a black leather waistcoat open at the front and black leather boots. The music was pumping and I couldn’t stop staring at him groping her arse and her sexy legs.

They stopped by a bench thing in the corner where a twenty something white couple were letting a big tattooed guy play with them. Keeping my distance, I couldn’t help squeeze my bulge as the euphoric waves started kicking in and my erection was straining to be let out. There were so many stunning, nearly naked couples and girls wandering around, but on this evening I only had eyes for Matt’s wife Lin.

She caught me staring at her from across the room so I decided to go over and say hello. Pushing through the crowd and squeezing in behind them, I gave her arm a little squeeze as she turned around and gave me a nervous smile. Matt was still caressing her under her dress and pulled her closer so I could move in next to her and asked,

“So you alone again tonight then…?”

“Yeah… It’s not the same as a single guy though… there’s always too many guys at these clubs… I preferred going to the couples only nights at Decadence in Kings Cross,” I replied.

“Never been to that one, maybe we can try it when Lawrence here gets a new girlfriend,” Matt said to Lin.

Lin then turned to me and asked,

“So you’re not getting back with Gail then…?”

“I can’t see that happening now she’s pregnant and living with him.”

“Listen mate… I’ve got go and have a word with Gerry, he’s just waved me over… Can you look after Lin till I get back..?”

Lin looked surprised as he quickly gave her a hug and said he’d be back soon. Suddenly we were alone and I could see she was embarrassed so I smiled and asked,

“Don’t worry, I’ve had a couple of sweets but I think I can keep the wolves away.”

She smiled and moved closer as a group of guys standing on her other side were edging closer.

“I’ve never tried it…!” she said as one of the guys, reached down and had a feel of her butt making her jump. Putting my arm around her waist I pulled her to my other side away from the group and told them,

Giving me another nervous smile she said,

“Thanks for that.. Matt tried to get me to try it last week but I told him no… But to be honest… I wouldn’t mind trying it as everyone else seems to be on something.”

“Yeah… It’s much more fun on the molly and makes you feel really relaxed and want to dance a lot. Tell you what, why don’t you try one tonight, I’ll look after you both and I’m sure Matt will have one as well… come on, lets go stand over there.”

I pointed towards a darker area by the wall and as we were away from prying eyes, pulled my little bag of sweets out and handed her one saying,

“There you go… have one now and if you like it, you can have another one later.”

Opening my bottle of water, I offered her some and she popped it in her mouth.

“There you go, it’ll take about an hour to start working and you’ll feel all nice and warm and probably start dancing.”

She seemed to be quite at ease so I asked,

“So does Matt get upset when the guys get too close…?”

“Not really,” she said giggling and caught me me squeezing my erection through my shorts.

“Yes I know… we saw her pulling you along by your… you know… and we were watching you playing with that couple last week…!”

“Really, so that turned you on then…?”

“Of course,” She said shyly as I grabbed her hand and placed it on my bulge.

Staring at me in shock with her mouth wide open, I thought she was going to pull away but she didn’t, she just looked down at it and squeezed it a few times, sort of exploring me while looking around in case Matt was coming back.

She didn’t push me away, so I pulled my zip down and without saying anything, she reached in and pulled me out. I’m not huge but a good eight inches when erect and was in heaven as her soft hands started pulling and squeezing it. So sliding my other hand down to her front thigh, I pushed in between her legs slightly and went up her dress at the front caressing her beautiful nylon covered thighs. Trembling slightly, I could tell she was as nervous as hell and staring around the room in case Matt came back and caught her.

Still cupping her beautiful bottom at the back, I gently rubbed and squeezed her mound over her knickers and tights. God, it felt so naughty and she was clearly enjoying my touch but suddenly she pushed my hands away saying,

Quickly putting myself away, I turned to see Matt standing directly behind me, smiling and pulling Lin towards him and kissed her on the cheek.

“Here you go mate, Lin’s had one so better join the fun.,” I said pressing a pill into his hand and continued,

“Yeah… just had to talk to my mate about some business,” Matt replied.

So as to give them a bit of time together and for the molly to kick in I said,

“Listen mate, I’m just gonna have a wander around and I’ll see you both later.”

Lin looked disappointed but I squeezed her arm as I walked away to reassure her everything was OK. My head was spinning as I pushed through the crowd and wondered what she was feeling. I couldn’t believe she let me have a feel between her legs and was equally amazed that she played with my cock after what Matt had told me, but couldn’t help wondering if he could have somehow been watching.

Be careful what you wish for – He likes to watch