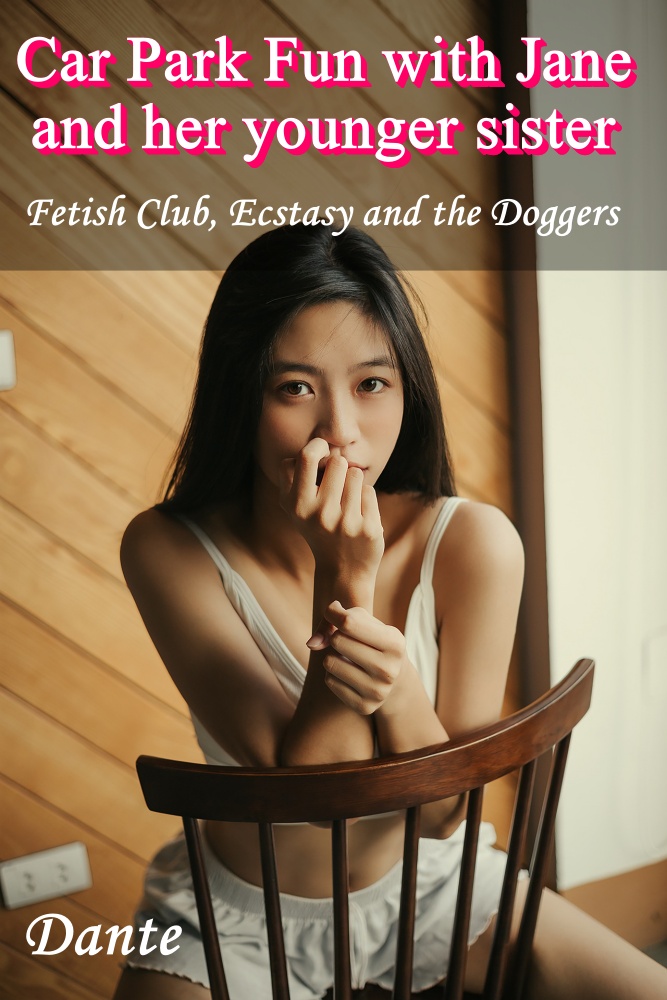 Car Park Fun with Jane and her younger sister – Fetish Club, Ecstasy and the Doggers

Chapter 1 – Lindy arrives from the Philippines

Chapter 2 – In the Fetish Club

Chapter 5 – Back at home

I was pleasantly surprised when Jane, my twenty six year old Filipino wife of two years told me her nineteen year old sister wanted to come over to the UK for a holiday. Lindy was a sexy little thing and had recently split up with her one and only childhood boyfriend. He’d got into a gang and was selling drugs and eventually ran off with another girl leaving her with a one year old baby.

I had no idea she’d told Lindy about our fun and games but whenever I met Lindy over in the Philippines, she was always touchy feely and playfully sitting on my lap or snuggling up to me in the back of a taxi and one time I remember quite vividly, pressing her much smaller little tits into my arm on a long one hour journey in a jeepney. It was quite clear she fancied me and Jane even seemed to encourage her, often turning a blind eye.

Lindy arrives from the Philippines

So Lindy arrived for a few weeks and her parents were looking after her baby back in the Philippines. The first week she was all excited and we showed her around the various villages and countryside near Bedford where we were living at the time. But what amazed me the most was how Jane was so open about our clubbing experiences, telling her what went on and how most girls were all dressed up in very revealing costumes or virtually naked.

I’d also found out that Lindy loved sex but had only ever been with one guy and he apparently had a pretty small cock. I told her that a few of the guys in the club walked around completely naked and it was quite normal for them to be openly playing with themselves while watching couples making love or having group sex. She was so excited at what we were telling her that it was decided that we’d all go to the club on the Saturday evening.

Jane was a bit apprehensive over the next couple of days but by Saturday she was also excited and asked me if I thought it would be OK to let her try the molly. I told her it was up to her being her older sister, but if we were on it and she wasn’t, she might find it less enjoyable. I also stressed that she’d probably be feeling pretty horny at seeing all the live action but Jane just giggled and said, that’s why she wanted her to try it, and not only that, she also said that she was OK if I wanted to play with her as well. As you can imagine, I was quite surprised and asked if she was serious or just joking, but she just smiled at me and said,

“I know you fancy her and I want to see what she does… I don’t mind because we play with other couples and you let your friend play with us that time… and I can’t wait to see her on the molly,” she giggled.

“Well I know she likes you and you’re always flirting with her or she tries to sit near you all the time.”

I was lost for words but eventually said,

“Yeah but she’s never been with anyone other than her boyfriend…!”

Jane just smiled and as she walked out the bedroom, gave my cock a nice long squeeze and said,

In the Fetish Club

Anyway, on the Saturday evening, Jane was wearing her short black PVC dress, no bra, high heeled boots and black hold up stockings. She let Lindy borrow her short, zip up front white silky dress which exposed her much smaller tits. Lindy was initially quite embarrassed because it was very low cut and Jane must have convinced her not to wear a bra, thereby I could see her nipples when she leaned forward. Definitely smaller than Jane but a good handful and longer than average nipples making her look incredibly sexy. She was also wearing tights and again,
I suspected that was Jane’s idea as she knew I had a thing for tights and when we were on ecstasy it turned me on no end.

So we all had some molly before driving up to London and when we arrived at the club around 10.45 pm it was already quite busy. After putting out coats in the holdall and handed it in, we showed Lindy around the club, explaining what went on and the no touching unless asked rules in case she started getting groped and needed to fend off the wolves. The molly had kicked in and I could feel the familiar hot flushes and light waves of euphoria sweeping over me. Jane was also looking a little weird like she always did, pulling strange faces and caressing her own breasts as we wandered around. I was walking in front and when we stopped to watch a young girl being licked out by her boyfriend on a bench with her knickers pulled over exposing her sexy little shaved pussy to the crowd, I noticed Jane was holding Lindy’s hand and they were both giggling, so I turned to ask Jane,

“Yes of course… she said she feels really nice but she’s never seen anything like this before.”

“Same as us then,” I said smiling and letting then get closer by stepping to the side and putting my arms around both their waists.

Lindy was staring wide eyed at the guy holding her legs wide open, licking and pulling her pussy lips apart then delving back in making her moan and writhe around.

Suddenly I felt Jane feeling for my cock behind her back so whispered,

Lindy must have heard as she turned her head and saw Jane squeezing my bulge, then giggled as she unzipped me and pulled it out. Lindy just stared as Jane stroked and fondled me, so slid my hands down over both hers and Janes hips and cupped their bottoms, gently caressing and squeezing before pulling them closer.

I could feel Lindy’s tits against my chest and Jane had already unzipped her dress at the front so her tits were half exposed. Reaching up I pulled it down to her waist and eased them out as Lindy continued staring at Janes hand, stroking and squeezing my well hard erection.

I knew she must be feeling the same as us, so slipped my hand up her skirt at the back and had a feel of her nylon covered legs and bottom. Initially she was shocked, but grabbing my arm tightly she froze, as if she wanted to say something but didn’t want me to stop what I was doing. Still staring at Jane pulling away at my cock, she was in another world. Jane was smiling like a Cheshire cat as she knew her sister was embarrassed and seemed to be teasing her. So reaching around her waist again, I slipped my hand up her dress and cupped her bottom as well.

The couple on the sofa were now in a 69 and he was pulling her little arse cheeks apart, licking away at her both her holes as she took him in her mouth. Jane was getting seriously turned on watching the show, so I slipped a finger in as we started kissing. Being so close together, both their breasts were pressing against my chest and Lindy was now staring open mouthed at the girl being given a really deep probing with his unusually long tongue.

She was also watching Lindy pressing her pussy against my thigh with her eyes rolling back as waves of euphoria swept over her. She must have sensed that I was also playing between Lindy’s legs so grabbed her hand moving it onto my cock. Lindy immediately pulled away, but after Jane told her it was OK and to have a feel, she looked up at me with big innocent eyes and started exploring me with her little hands. And as we were in a tight group, nobody could see but I could tell that Lindy was getting seriously turned on.

“Tell you what Jane, lets go find somewhere a little less crowded to sit down.”

Lindy was clearly spaced out as she leaned against me watching Jane as I fondled her sexy little tits, and was getting so close to the edge playing with them both together I had to tell Jane to slow down.

“No you want her to suck it,” she giggled.

“Really…! Well I don’t mind… It’s turning me on as well… go on Lindy, you can suck him if you want.”

“Hmm m… yes… I want to see what she does,” she whispered in my ear.

“Oh My God Jane…! that was disgusting…!”