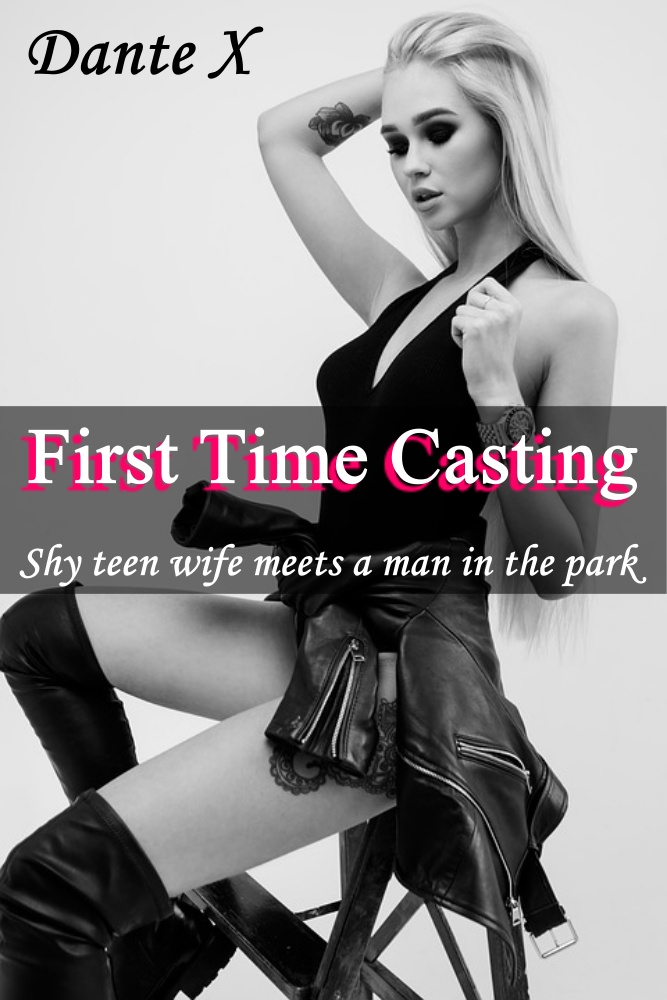 Trina 19 was probably the most attractive yet also the most reserved girl in high school and all the guys wanted to go out with her. Tall and slim at 120 pounds with beautiful long blond hair and an alluring visage. She married Pete also 19 a year previously and because she was a virgin had never been with any other guys. Although Pete had a small manhood, sex was good for the first six months, except for her reserved attitude and unwillingness to try anything new.

Trina was probably the most attractive yet also the most reserved girl in our high school when growing up and all the guys wanted to go out with her. Well I did for sure, but I suppose most of the guys just wanted to get into her knickers. Tall and slim at 120 pounds (45 K G’s) with beautiful long blond hair and an alluring visage. Her breasts were quite small but a nice handful and her best feature was definitely her long sexy legs and tight bottom.

Anyway, after several attempts, I managed to get her to go out with me and after we left high school, both attended the same college. She was studying business management and I did a course on architectural building drawings. We married at 18 and because she’d never been with any other guys was still a virgin.

Sex was good for the first six months, except for her reserved attitude and unwillingness to try anything new. But even though I wasn’t very well endowed, I’m sure she enjoyed it as much as me and she absolutely loved it when I used to tell her fantasy stories, like a stranger picking her up on the way home from work and seducing her in his car. I’d be playing with her as I’d already cum and send her over the edge with my fingers. But what also puzzled me was, she’d always ask me what I’d do if she really did meet someone and had an affair? However, I always brushed it off as no way could I ever have imagined her being unfaithful behind my back.

But then my worst nightmare came true when she came home one day looking really sheepish and said she had something to tell me….

It was a Friday afternoon and under her knee length winter coat she was wearing her black stockings and a short black dress. I’d basically come home a few hours earlier than normal as I’m now working as a trainee shopfitter and the job we were working on in London had finished sooner than expected. Anyway, I was surprised that was dressed like that and she immediately hugged me and told me to sit down as she had something important to tell me. Thinking the worst, I led her into the lounge by the hand and sat down as she stood in front of me and took off her coat. She looked so beautiful and sexy standing there looking down at me with a worried look on her face.

“Please don’t get angry Pete, I couldn’t help it as he told me I could make a lot of money and said he was a photographer that owned a modelling agency.”

“What the fuck Trina…! Are you out of your mind…?”

“Please darling, just hear me out then if you say no I won’t see him anymore. “

“So how many times have you seen him then…?”

“Twice, once in the park yesterday and then again today.”

“So is that why you’re all dressed up then…?”

“Yes, he told me to wear something sexy so I chose these and no knickers,” she said lifting the hem of her dress exposing her hold up stockings and beautiful wispy haired pussy.

“No darling, I was walking home through the park and he was sitting on a bench with a camera around his neck. I thought he was taking pictures of the birds and ducks on the lake but as I walked past he asked me the time, I told him it was 3.15 and then he said how beautiful I was and asked if I’d ever done any modelling, I thought it was a bit weird and didn’t answer, I carried on walking but he started following me and I could hear him taking pictures with his camera. I got angry and turned around to ask him what the hell he thought he was doing? He said he just wanted to take a few pictures and offered me a hundred pounds if I’d sit on the bench and let him take some more.”

“Yes, I couldn’t believe it and he just handed me the money.”

“Yes, he said it would only take about fifteen minutes and asked me to sit down, I was going to give him the money back but he said his name was Pierre and asked mine and if I was married, I told him I was and he said that he had lots of girls on his books that had boyfriends or were married and their husbands were OK with it. I was confused and asked him what he meant and he said he was an agent and helped girls get into the adult film industry and modelling.”

“About forty or fifty I think and he’s French, anyway he seemed really nice and I thought it wasn’t such a big deal to make a hundred pounds in fifteen minutes so I said OK.”

“So you let him take pictures of you in the park…?”

“Yes, but after he took a few of me in different poses, he wanted me to unbutton my blouse and part my legs, he was snapping away and it was really weird because I could tell he was aroused and the more he told me to change position, it was like I was in a trance and just did what he said, then he had me holding my knickers over and he was on his knees taking pictures between my legs… See it’s making you all hard just like it did him,” she said reaching down to squeeze my obvious erection.

“Oh fuck me Trina, I can’t believe you did that, flashing an old guy your pussy in the park.”

“So what happened then…?” I said lifting my head momentarily.

She orgasmed again as she told me what he did, so quickly stripping off I jumped on top of her and plunged in, but because I was so worked up I didn’t last long and shot my load within a minute and rolled off.

“So how come you’re all red down there then…?”

“Because when I saw him again today he said he’d pay me two hundred if I dressed up in something sexy and meet him in the park again.”

“So why didn’t you tell me this yesterday…?”

“Because you didn’t get home till late and were really tired and I was scared you might go crazy so I thought I’d wait until you were in a good mood.”

“Please don’t leave me or get angry… I won’t do it again I promise.”

“So do you want to know what happened today then…?”

“Well, I was thinking about what he said and what happened and decided to dress up like he asked. He said he thought I wasn’t coming back because he didn’t mean to touch me the day before and that I’d probably told you what happened. So we walked along for a while as he asked me if I enjoyed what we did yesterday, I told him I felt really guilty and wanted to tell you what happened and he handed me five hundred pounds! I was so shocked and asked him what he expected me to do? He said he wanted to do a proper photo shoot and casting.”

“But you must have realised he wanted to have sex with you..?”

“Yes we were but he said we couldn’t take those kind of pictures in the park so I went with him to his hotel.”

“He was staying at the Ibis opposite the park.”

I was absolutely speechless but told her to continue as I lay next to her caressing her.

“I nearly ran home but he’d already handed me the money and said he didn’t want me to do anything I didn’t feel comfortable with, so I told him I wasn’t a prostitute and wasn’t prepared to let him fuck me. Anyway, we got to the hotel and when we were in the room he was talking about all the girls he’d videoed and that his website was called Euro Teenage or Video Teenage, I can’t remember exactly as I was so nervous. There was a video camera already set up on a tripod by the bed and he was also taking pictures with his digital camera. Then he told me to relax and just walk around, look out the window, stand by the table, sit in a chair crossing my legs. I was starting to relax but told him I didn’t want my face in any pictures or the video so he said it was no problem as many girls were embarrassed at their first casting and his software could easily blur out the faces which actually made it even more appealing to his subscribers. So that put my mind at rest and he got me to stand by the bed and slowly lift my dress, and when he saw I had no knickers on, God it was so funny and he was talking to himself in French and saying things like Oh la la belle and superbe. I turned around and he made me lean over and rest my hands on the bed as he was taking close up pictures of my bum and between my legs.”