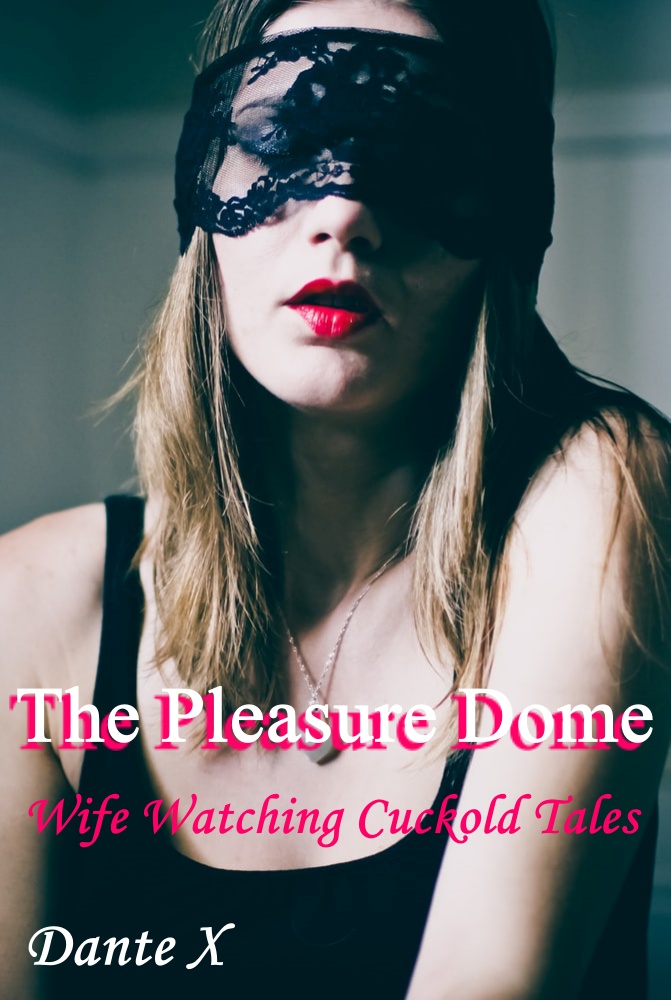 Justin is married to Sue but in a sexless marriage. Sitting at the bar in a casino one evening, he meets Mark who was watching his wife Julie being chatted up by a stranger across the room. Julie leaves with the stranger and Mark invites Justin to follow along as his wife texted him to say they were going to a dogging spot by the lakes. When Justin returned home, his wife Sue wanted to know where he’d been. He told her what happened and she became aroused because her best friend Gina was seeing other men but with her husbands consent. Mark then invites Justin, Sue and Gina to the Pleasure Dome where things take an unexpected turn…

It was past midnight and I knew the Grosvenor Casino down town was always busy, they usually had some live music and the bar was open all night. Anyway, I was wondering why so many attractive girls were wandering around, seemingly alone and then I realised they were on the pull. There was this beautiful twenty something Asian girl hovering around one of the roulette tables and then this old guy was chatting her up. About twenty minutes later and they were walking out together with him hugging and groping her arse.

I’d already had three beers and just ordered another when I noticed him sitting next to me at the bar, he was staring across the room at another very elegant and attractive girl sitting on a sofa in the corner with a guy.

After a few minutes I said to the guy sitting next to me,

He looked at me while clutching his phone and gave me a nervous smile.

“You married then…?” He asked looking back at the girl.

“Yeah but it’s not like it used to be, always on bloody Facebook or chatting with her friends online.”

He was still staring at the girl and then I noticed her looking over at him.

Then he looks down at his phone and was reading a message. The guy with the girl had walked to the opposite side of the bar and was ordering some drinks. A few minutes later he turned to me and said,

“Err yeah, why not, Justin, ” I replied and we shook hands.

We both watched the guy walk back to the girl, hand her a cocktail and sat next to her.

“So you here alone then…?” I asked trying to make conversation.

He looked at me and then his phone went off again, so after reading the message he said,

“No I’m here with her,” nodding towards the girl we were both watching.

“What you mean the girl with that guy over there on the sofa…?”

“Yeah, she’s just messaged me saying he wants to give her a ride home.”

“Sorry mate, so that’s your girlfriend then…?”

As we both stared across the room the guy had his arm around her and was stroking her nylon covered leg with his other hand.

“It’s our little game, “he said nervously having another swig of his beer.

“Sorry Mark but I’m confused, you’re going to let him give her a lift home…!”

“Yeah but I’ll be following and she’ll be texting me so I know what’s going on. I like to watch and we used to be like you and your missus, but since we started doing this…. Well, it’s hard to explain to most people but it gives me feelings I’ve never experienced before. Julie still gets nervous and she’s not a slut or anything but I must say our marriage is now even stronger than ever.”

“Really…! Well I can see that she’s beautiful and does look like she’s pretty shy.”

“Yeah, that’s what turns me on, it’s watching her getting chatted up, and then seeing how she lets the guy play with her… I get these weird feelings in my gut and when we make love later, well… it’s like unbelievable, she’s so fucking turned on and tells me all the details, how he kissed her and how he gets her to play with him or suck his cock and how he starts touching her up.”

“Fuck me mate, that’s a bit weird to say the least, so you don’t mind her fucking other guys then..?”

“She doesn’t always go that far, sometimes she’ll just flirt and let me see them touching her up or she’ll play in the car and I’ll be watching from a distance.”

“So the guy doesn’t know you’re there or her husband then…?”

“Yeah… But sometimes if she really likes the guy and we decide to bring him home, she’ll tell him.”

“So what happens then…?”

“Sometimes the guy’s a bit shocked but once they realise I’m a cuck and they can fuck Julie, they’re always up for it.”

“Fuck me, I can’t imagine my missus doing anything like that…!”

“Very interesting, so how old are you two then…?”

“Similar to me and my missus, I’m forty and she’s thirty two but we don’t do it anymore. ”

“But you still love her then…?”

“Yeah, we’ve been together for eleven years now. ”

Another message came through on his phone and they were getting up to leave.

“Sorry mate got a go now,” he said getting up to follow them.

I was absolutely stunned as she was truly a sight to behold, tall and beautiful with long dark brown hair, mid thigh dress with either stockings or pantyhose. It was nearly one o’clock so I told him I was calling it a night and heading home as well, walking with him towards the exit.