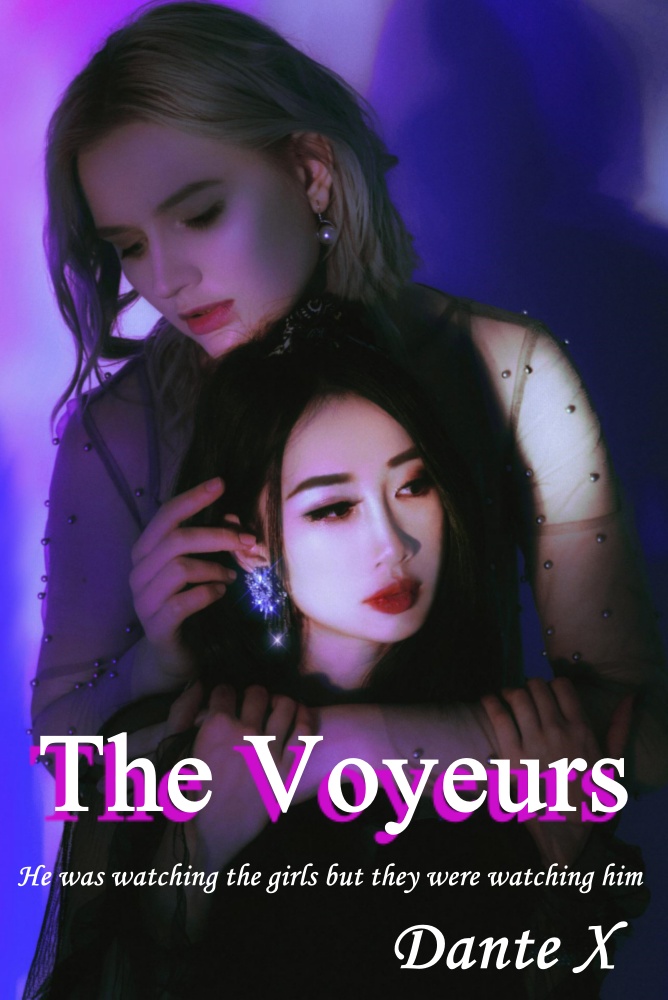 It was just past midnight when Jason walked out on the balcony and noticed the lights were on in the apartment opposite. An Asian girl that he’d seen a few times previously going in and out of the building during the daytime had come out and was standing outside on her balcony. They were both at the same level on the 2nd floor and with very little moonlight so quite dark. Laying on a sun lounger he assumed she could also see him as his light was also on. Asami was Asian and in her early twenties, small and petite and her friend Wendy was British and of similar age but taller and more dominant.

It was just past midnight when I walked out on the balcony and noticed the lights were on in the apartment opposite mine. An Asian girl that I’d seen a few times previously going in and out of the building during the daytime had come out and was standing outside on her balcony. We were both at the same level on the 2nd floor and with very little moonlight so was quite dark. Laying on my sun lounger I assumed she could also see me as my light was also on. She looked Asian and in her early twenties, small and petite but always seemed to be with her girlfriend so assumed they were flatmates. She was wearing a long T shirt and just standing there, gazing up and down the street.

We could see each other quite clearly as it was only about thirty meters and when she looked over, I was sure she smiled but quickly looked away. Normally their curtains were closed but on this particular evening, I could see directly into her bedroom at the large double bed. Again assuming it must be a two bedroomed apartment and her flatmate had her own bedroom. But then I saw her appear in a white bathrobe and lay down on the bed. She was white British and taller that the girl standing outside, long dark hair and was also quite attractive.

The girl outside then stared directly at me, turned around and walked inside. I thought that was it and was just about to go back inside when I saw her pull her T-shirt off and climb on the bed naked. She hadn’t even closed the sliding door or curtains and I wondered what she was playing at. Now as a healthy red blooded forty eight year old male, I was becoming aroused. The girl from outside was laying on her back as her friend started kissing and caressing her. I don’t know if the friend was aware but the girl from outside was still glancing at me as her friend slowly caressed her breasts and was then sucking on her nipples.

They were in that position for a good five minutes before the taller one sat up, still on her friends face but caressing her sexy little breasts while watching me stroking my cock. She must have told her friend as she slipped off and her friend sat up to have a look. Both now staring at me as I stroked my length, they seemed to be fascinated and the taller girl blew me a kiss and waved.

What the fuck! I was thinking but then saw them change position so they were laying across the bed sideways. Again they went down on each other but now I could see both of them licking away between each others legs. It was such a turn on and they were really getting into each other, rolling around and pulling each others legs apart as if trying to give me a really naughty show.

I was just about to shoot my load but then they stopped and the taller one was sitting up waving at me again. I couldn’t believe it but stopped wanking and waved back. She was then pointing at herself and her friend and then at me, clearly asking if they could come over. I was thinking they were probably winding me up but gave them a thumbs up anyway to see what would happen. She responded by holding her hand up showing five fingers and was then talking to her friend on the bed. It looked like the smaller Asian girl didn’t want to come, but after a few minutes they both jumped up and disappeared into another room and the lights went off.

Walking to the edge of the balcony I looked down and sure enough they both appeared coming out of their apartment building and crossed the road. It was completely still and dark with no traffic so leaning over I told them number twenty two and buzzed the main door open. Still in my underwear I grabbed a shirt and quickly pulled it on, I have no idea why but just felt too naked I suppose. Opening the door I stood and waited, the lift door opened and they stepped out wearing coats. Giving them a wave they walked down the corridor and into my apartment.

“Wendy and Asami,” the taller one said obviously the more dominant player.

“So you like to watch..?” She said as her friend was looking really scared.

“Well, who wouldn’t want to watch a couple of beautiful girls like you,” I replied.

“Hmm m… but we’re not usually into guys and I’m Asami’s first girlfriend, she’s from Japan but when she said you were watching and we saw you playing with yourself…”

“You thought you’d give me a show and wind me up,” I continued.

“Yeah I suppose… but she’s never had a cock before and… well… you look like you have a nice specimen, maybe bit big but you have to start somewhere,” she giggled.

“So you going to show us your bedroom then…?”

“Sure… Come on in and can I take your coats.”

“All in good time,” Wendy said pulling Asami along by her hand.

Walking into the bedroom, I was amazed at how forward Wendy was and noticed a small dolphin tattoo on her thigh. Asami was clearly as nervous as hell and just stood there clutching her coat.

“So do you speak English then…?” I asked Asami.

“So have you ever been with a guy before…?” I asked.

Looking at the floor she shook her head as Wendy said,

“Look she’s into girls but I like both and I thought it would be a nice experience for her, she told me she wanted to try one so here we are.”

Peeling off her coat she was completely naked underneath and even more beautiful than I’d imagined, soft white skin with sexy long legs and her bottom quivered as she walked. She then undid Asami’s coat and reluctantly she let Wendy take it off. Standing there totally naked her breasts were really small and down below had a thin covering of new growth pubic hair. Taking her hand, Wendy led her to the bed and told her to open her legs. Standing there like a scared cat, she let her friend caress her small breasts and then run her other hand down to cup her bottom.

“See… she’s quite obedient and has a lovely little body, are you going to join us…?” Wendy asked.

Slipping my shirt off, I stepped closer and started caressing Asami as well, both of us exploring her together, her beautiful little breasts were just a handful and had tiny hard nipples. Reaching down to her bottom was also nice and soft and I could feel her wetness as I slid my finger over her tiny little slit. Wendy then entered her from the front making Asami sigh and grab her hand. But Wendy told her to let go and she forced another finger in, making her bend her legs and let out a sigh.

“She’s really tight but will do what I say,” Wendy said working her fingers in and out as Asami started wailing and sighing like all Asian girls do.

“Hmm m… she like that,” Wendy said as Asami was still jerking between us.

Wendy then eased out so slid my hand down and fingered her from the front as well. Her pussy was so fucking small and tight I was amazed and couldn’t wait to get down there and have a taste.

“Wow…! You’re even bigger than I thought… Hmm m… this is gonna be fun.”

While still snogging Asami I fingered her hard and fast trying to make her squirt and cum. It didn’t take long and she was soon spurting all over my hand, finger still deep in her arse she was making noises I couldn’t believe and was sure the neighbours would wake up. Wendy was now on the floor, sucking and slurping around my cock as she held onto Asami’s arse and when she calmed down, eased out and let her lay down on the bed. Sitting down next to her Wendy saw her chance and jumped on my cock, easing herself down while I held her hips and sucked on her tits. She was also tight but nowhere near her Japanese friend who was now on her side, watching me lift Wendy up and down, probing and opening her up like never before. Now Wendy was moaning and wailing as she was stretched to the limit, my eight inch length all the way in. Pulling her down onto my chest, I started going faster, fucking her like I used to fuck my ex wife. But Wendy was far tighter and when she wasn’t moaning and screaming I was too big, was biting into my shoulder.

Then I felt Asami’s little hand between my legs, exploring my balls and grabbing my cock as it slid in and out of her friend. I knew I wasn’t going to last long, so forced a finger in her anus and fucked her hard and fast. She was going crazy as I unloaded my pent up spunk deep in her wet and willing cunt, jerking and trembling as she also went over the edge.