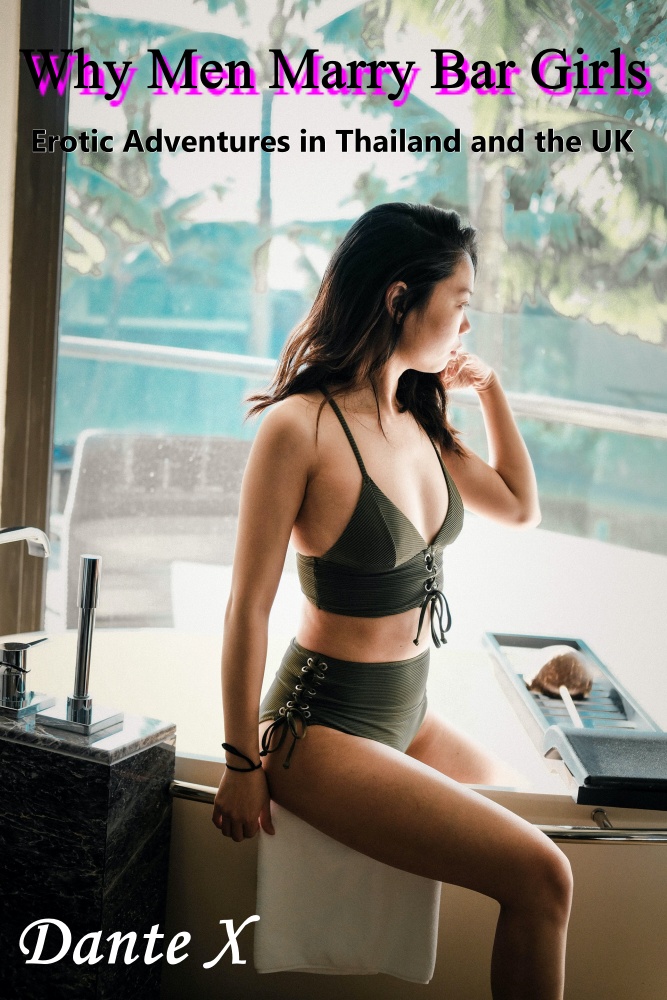 Chapter One – Lek married to a German

Chapter Eight – The First Time I Shared my Asian Wife

This is a book I’ve been meaning to write for some time now as I have so many stories to tell. The question of WHY someone would marry a bar girl is quite interesting because I was also married to a Thai Bar Girl for 7 years and many of our naughty stories and encounters are detailed in my other books, like the Thai wife series, Adventures in Thailand and Bangkok and the Vampires of the Night. I have also added three chapters from the above books (Chapters 1, 7 and 8) as a free bonus as they are also very relevant to this book.

However after living in and out of Thailand for over 30 years and running a pool resort here for the last seven years, I have literally hundreds of stories to tell. But this book is going to focus primarily on the bar girls and their partners I know personally and been friends with or interacted with living in the UK and Thailand.

There are many reasons NOT to marry a bar girl, but then again, there are many reasons not to marry girls from the west as there still thousands of divorces. So marrying a bar girl can be a very interesting life experience, provided you don’t send her a stupid amount of money every month or sell up and build a house in Thailand. The best advice I can give you is, go live with her in Thailand and rent your property out in the UK or wherever and live on the income. That way she cannot milk you dry and leave you destitute like the thousands of love struck foreigners that have fallen into that trap, broke their heart and lost everything.

The main reason guys come out to Thailand is because of the availability of the thousands upon thousands of girls. Most looking for a cash cow to buy or build them a house and basically support them and their families. Love does not come into it for them, but that is not the case for the guys who many times, fall head over heels in love with the first, short fat ugly bar girl that gives them a blow job. I have always been amazed at why guys marry and bring home to UK an obvious Thai hooker, covered in tattoos and after a year or so leaves him because she realises he wasn’t rich and there are far too many younger sexy guys out there and walks away.

In fact, of all the married Thai girls I’ve known in the UK… 95% are now on their second or third husband. No money no honey is one of their little sayings.

However, the complete opposite is true with Filipinos whereas, virtually all the Filipinos we knew are still married to their same partner 10 to 15 years later. In my opinion, Thai’s marry until the money runs out and Filipinos marry for the long term.

So what are the good reasons marry a Thai bar girl?

The sex is amazing and most of them can’t get enough. Some of the most incredible sexual experiences of my life was with my first Thai wife and every day without fail, we’d be making love morning and night. We had quite a few threesomes with girls and even a few times where we’d pick up a young hunky guy. However, that’s not the case with most Thai girls as they can also be incredibly jealous and you don’t want to piss off a Thai girl if you want to keep your manhood.

So that being said, I’m now in my sixties, been married and divorced several times and also had four long term living together relationships, currently very happily married for 13 years to a middle class, university educated Thai woman, so I think I’ve had enough experience to know what I’m talking about.

Each chapter will be a stand alone story so relax and enjoy.

Lek married to a German

Many a time while living in Bangkok I’d find myself cruising the bars at night because my first Thai wife had gone up country for a few weeks to spend time with her family. She’d get bored living in Bangkok where I was working, recruiting and training distributors for a network marketing company and had a stunning apartment on the 23rd floor which had amazing views over the Bangkok skyline.

Anyway, she knew that I had girls on the side and I even suspected she had a Thai boyfriend up country but it was never discussed. And if she ever saw a girl wave or say hello to me in a bar or walking around, she would say, “OK for fun but not for love,” make of that what you will, because I don’t think Thai’s understand the word love, well not between husband and wife anyway. Most of the girls don’t even look after their own children, getting pregnant with a low life Thai guy who runs away as soon as the baby is born, then hands the child over to their mother or other family member while she goes off to Bangkok or Pattaya to become a bar girl!

So I actually had several regular girlfriends that I’d go to a short time hotel with or bring home a few times a week, and being a single guy in Bangkok, there were literally thousands to choose from. However after a few years and hundreds of girls, one becomes a little jaded and cynical about their true motivations. They are always on the pick up and tell you everything you want to hear, but once in the bedroom, as soon as they’ve made you cum, and believe me, some of them can be in and out in less than 15 minutes, their attitude changes and they only want their money, a tip and they’re gone. So after a while I became very picky and only took a new girl home very occasionally.

So that leads me onto Lek.

Lek was married to a German and we’d become friends because I took her home many times after bumping into her in the Thermae bar in Sukhumvit road. We were both married and it was like two ships passing in the night, we’d have our fun and talk about her husband and life in Germany. And when I asked her why she came out picking up guys in the bar when she was married to apparently a very rich German with a big house and land, she simply admitted that she enjoyed the sex. I used to give her 500 Baht or sometimes 1000 as it was the thing to do. She was an exception and didn’t need the money but I think she loved the hooker lifestyle and when with him in Germany was bored to death.

One night in particular comes to mind, I walked in the Thermae bar, it was after midnight and saw her standing by the bar. We’d been together several times before and as soon as she saw me, waved me over. Now for those readers that don’t know what the Thermae bar is, it’s a freelance pick up joint for girls that don’t work at a normal bar that charges a bar fine to take the girl out of the bar. All the girls in the Thermae bar either have daytime jobs like shop workers or whatever and need to supplement their income by going with a guy once or twice a month. Or they could be ex bar girls that are too old to work in a regular girly / go-go bar. And there were also many girls that were divorced from their farang husbands and living back in Thailand.

You can take a girl out of the bar but you can never take the bar out of the girl.

It was always quite busy after midnight with girls and guys so it was standing room only like sardines in a can. We had a couple of beers and a brief chat then took a taxi to a short time hotel. The reason I went with her often was because the sex was amazing and she was such a dirty bitch, we did things even my wife didn’t do. She even asked me to bring some vibrators and sex toys in from the UK as at the time, it was impossible to buy them in Thailand.

She offered me some but after seeing her so hyped up, I declined. She then jumped back on the bed and put another sexy movie on as I lay next to her playing with her tits. But because I was so spent and unable to get hard again, she was holding my head down between her legs making my use my fingers and tongue on her! This went on for over an hour and my tongue was physically aching and needed a rest, but every time I tried to come up for air, she was pushing me back down or trying to fist herself as I kissed or sucked on her tits.

Truly one of the most active girls I’d ever met.

Another time I bumped into her was in the daytime and she was with a friend. Both walking around on the pick up and as soon as she saw me, ran over and convinced me to take them both back to my hotel. I’d only just arrived that morning and my wife had literally jumped on the train to her village an hour previously.

Eventually her friend came round and it all started up again but I was so fucking knackered, made an excuse that I had to meet someone at the office and managed to get them out of my room.