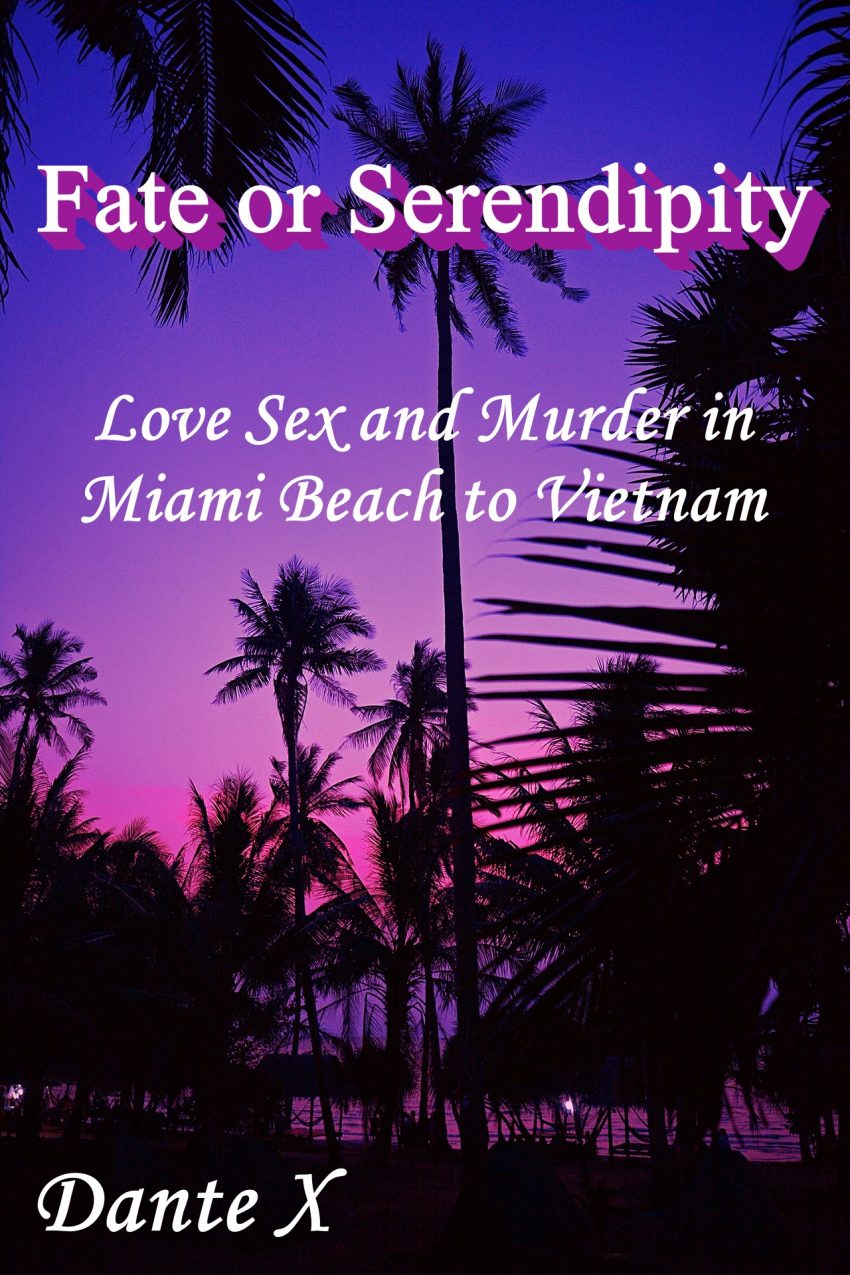 Fate or Serendipity – Love Sex and Murder in Miami Beach to Vietnam – 14,300 Words

Vince had just married Helen and on their honeymoon at the Rui Plaza Hotel on Miami’s South Beach, Vivien a stunning Asian girl walks by on the arm of her husband Liam. Vince and Vivien’s eyes locked momentarily and he was absolutely mesmerized. Fate and serendipity came to mind but what the hell was going on… He’d just married Helen the love of his life so what the hell was he thinking! But when she turned around and looked back at him, he knew something far deeper was going on, did she just have the exact same feeling?

The story starts on Miami beach but when Vince’s wife Helen gets murdered the excitement really starts as Liam who was involved in human trafficking was going to sell his new wife Vivien but it all went wrong. Vince and Vivien go on the run and are being pursued by her husband Liam who tracks them to Key West but is wanted by the police for killing two police officers and Helen.

But see what happens when they meet Vivien’s friends Diu 24 and Hendrik in Phu Quoc, Vietnam.

Fate or Serendipity – Table of Contents

Vince 26 is writing the story

A couple of years older than me at twenty eight, I met Helen via a dating website. I’m Vince and being a shop fitter was living and working all over the UK, but a few months after we met decided to move in together. Helen works for a solicitors in Manchester so we found a flat and been living together for the last two years then decided to get married.

Imagine my astonishment when on our honeymoon at the Rui Plaza Hotel on Miami’s South Beach, a stunning Asian girl walks by on the arm of, I assumed her husband. And as our eyes locked momentarily, I was absolutely mesmerized. Fate and serendipity came to mind but what the hell was going on… I’d just married the love of my life so what the hell was I thinking! But when she turned around and looked back at me, I knew something far deeper was going on, did she just have the exact same feeling?

Trying to act normally I asked Helen if she fancied a trip up to Fort Lauderdale, there was a boat show advertised and we were getting a little bored sitting by the pool. Collecting up our things we headed towards the elevator. It was our first trip to the USA and Helen wasn’t sure if she’d want to come again, saying she had a bad feeling about Miami but couldn’t tell me why. We hadn’t even been down-town yet, where it was supposedly quite rough so there was no reason for her to feel so uneasy. We’d basically spent the first couple of days strolling up and down the beach and lounging around in the hotel which was all very nice and peaceful.

Up in the room I couldn’t stop thinking about the stunning Asian girl and how our eyes met, it was only a second or two but gave me the strangest feeling in my stomach, and why the hell did she look back, she could obviously see I was with Helen and she was with her partner as well. I tried to push the event out of my mind but it was like we knew each other, yet we didn’t and what really stunned me was I’d never been so helplessly attracted to anyone in my life.

We took a taxi up to the Fort Lauderdale Boat Show and wandered around all the beautiful motor yachts but after a couple of hours, Helen said she wasn’t feeling too well, the heat was unbearable so we decided to come back to the hotel. It was only mid afternoon so I asked her if she wanted to come up to the roof top bar for a drink? She said she was too tired and wanted to have a sleep so told me to come and get her in a couple of hours.

The view from the roof top bar was incredible and after a nice cold beer decided to have a wander around, even going back down to the pool hoping to see the Asian girl again. I knew it was stupid and wrong but couldn’t stop thinking about her… Was she married? Did she live in the USA? Why did she look back at me?

The pool was fairly quiet with only a few couples sitting around, the sun was still really hot so I went back inside and then I saw her. She was standing by the check in desk with her partner and had her back to me but immediately turned her head and caught me staring at her. Like a fool I bumped into a porter who dropped the box he was carrying and caught her smiling to herself before turning away.

Walking towards the elevators I tried to act normally and realised that they were walking directly towards me. The doors opened and as I stepped inside, her partner raised his hand and indicated for me to hold the door. She was even more beautiful and exotic close up than I remembered and as they entered the elevator, he said in a typical South London accent,

“Thanks mate, what floor…?”

“You from England as well then…?” he asked.

“Yeah… Manchester and you…?”

“Croydon, I’m Liam and this is the missus Vivien,” he said holding out his hand.

I shook his hand and looked at Vivien who was smiling nervously then said,

“Vietnam,” she replied as the doors opened at the 5th floor.

Not wanting to get out the elevator I quickly said,

“Maybe we can have a drink together in the bar sometime…?”

“Sure, we’re here for a couple more days,” he said as I stepped out and the doors closed slowly with her staring at me again.

Fuck! what was that all about, I thought to myself walking down the corridor to our room, even more intrigued now I knew they were from the UK as well. But he was about ten years older than her, mid thirties I guessed. Back in the room Helen was still asleep so I gently sat on the bed and stroked her hair, opening her eyes she smiled and said,

“Maybe… but I was hoping you’d… you know… come and cuddle your new wife for a while.”

Slipping my hand under the covers, it was obvious she’d been playing with herself so started rubbing her bud which made her roll onto her back and sigh, then slipped a couple of fingers inside her as she pulled me down, kissing me on the mouth as I lay down next to her on the bed.

“I don’t know… maybe it’s the heat… why don’t you help me,” she said reaching down for my growing erection.

We were soon rolling around on the bed and as I slipped in said jokingly,

“What girls…?” she said all seriously.

“Oh… I think they were Cubans and trying to talk to me because they heard I was English.”

“Well they were so chatty and then one of them asked if I could go up to their room.”

“Only for a little while because you were sleeping, I think they were high on something and said they’d never been with a British guy before… and when they pulled my cock out…”

That was all it took to send her over the edge, moaning and sighing she had a massive orgasm so I increased my pace and while fucking her hard and fast continued the fantasy,

“You dirty bastard, in your dreams,” she said reaching down to squeeze my balls.

Letting out a long deep groan, I shot my load and clamped my mouth over hers, kissing each other passionately as my thoughts returned to the sexy Asian girl with Liam.