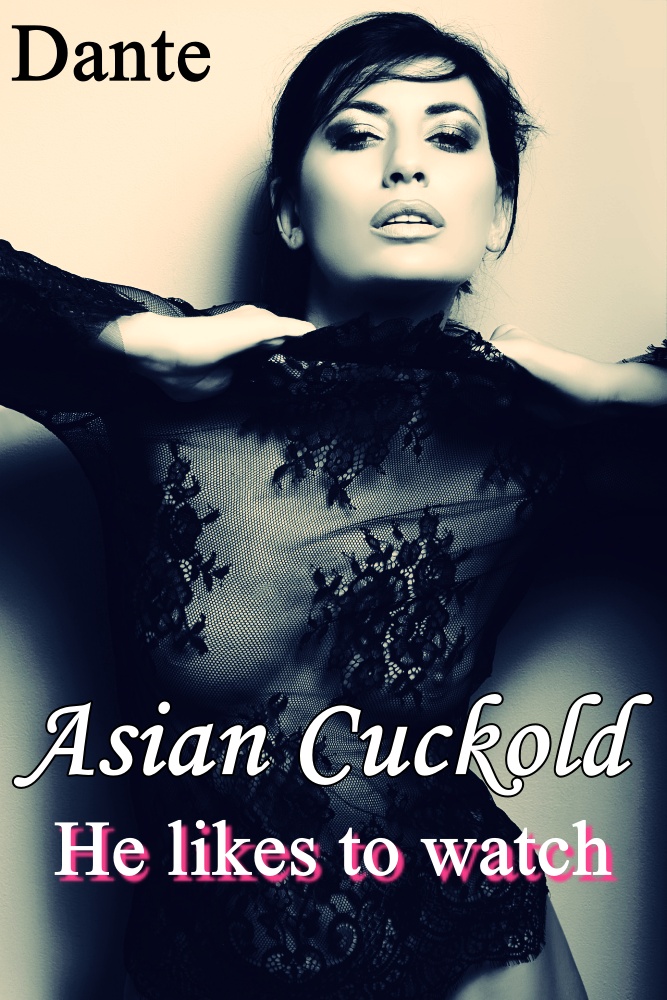 Chapter 3 – In the play room

She was a stunningly tall and attractive Asian stunner, sexy long legs with a perfectly smooth white bottom that quivered slightly as she walked. No skirt or clothes, just a silver G-string and a matching pair of silver high heeled shoes, and as she stopped and turned, I couldn’t help staring at her small shapely breasts with extra long nipples that had tiny little silver rings around the base. Her husband looked English, slightly shorter than her and around forty-ish.

I’m Keith, forty two and my wife Gail is twenty five, both also from England and were introduced to Ayanna and Nick a few weeks later by another clubbing mate and his wife, and for whatever reason, they seemed to really fancy Gail. However, Gail was far too shy to play at first, but after we’d had a couple of E’s, she became much more adventurous. So over the next few months, we’d invariably bump into them in the club and watch each other playing together. I was always so horny when we went out clubbing and was often trying to get Gail to play with other couples, but during the time we met Ayanna and Nick, she was still only into watching and playing with each other. However she did like watching me touch up other girls, and even encouraged me when we were in a close intimate situation.

This story is about what developed between us and how I found out Nick was a cuck and subservient to Ayanna and couldn’t get it up when he was on the molly. Ayanna was thirty two and half Asian with a Japanese mother, truly a vision to behold and turned heads wherever she went.

So what happened in the club on this particular night was, Gail and I were watching a couple of guys playing with a girl in a fairly dark crowded room. Gail was standing next to me and Ayanna was directly in front, her beautiful naked bottom almost touching my cock, of which Gail had released and was stroking and squeezing like she usually did once the euphoric feelings from the molly kicked in. But on this occasion, she was encouraging me to touch Ayanna’s sexy butt. I don’t know why, because the club rules are, that we always ask before touching, but because I was so high and turned on, I reached out and cupped her bottom, gently squeezing and caressing her. She was so soft and smooth and I didn’t even pull away when she turned around to see who was touching her, and instead of brushing my hand away, like I saw her do with several guys before, she just smiled and let me carry on. I was in heaven with Gail stroking my cock as I stroked and caressed the soft fleshy bit, just under her butt between her thighs and G-string down between her legs.

Suddenly her husband Nick who must have seen what I was doing asked,

“Did she let you finger her…?”

About an hour later, I saw them playing with another hunky looking guy covered in tribal tattoos, he was kneeling between her legs as we sat on a bench opposite. I was playing with Gail as we watched this stranger, kneeling on the floor between Ayanna’s legs, he was holding one of her leg up and sucking her toes. Her husband Nick was playing with her tits, while watching me play with Gail. The next thing I remembered was, the stranger pulling her g-string over and going down on her as she stared at me with a really naughty look in her eyes. It was also the first time I’d seen her beautiful smooth pussy so close, but as it was quite dark and being on the molly, my eyes couldn’t focus properly. However, the turn on was watching this stranger licking between Ayanna’s legs, while they watched me fingering Gail with her legs wide open, knickers pulled over and breasts exposed.

I knew they both fancied Gail as they were always trying to get us to play with them, but Gail, for whatever reason, always walked away. Then one day we were all standing together and talking about Gail’s shapely 34B breasts, compared to Ayanna’s which were just as nice but slightly smaller at 32B, when I casually pulled Gail’s front zip down to show them. Her half inch long nipples were always sticking out, and incredibly, they both started groping her like I couldn’t believe. And although Gail was embarrassed, she let them do it for a good thirty seconds but then pulled her zip up and we walked away.

Another time, we were in the club and while wandering around, walked into a dark room and saw them on some floor cushions, Nick noticed us and gave us a nod, he was holding her leg up as some stranger was laying behind her and fucking her from behind. Ayanna was acting as if she was embarrassed, however Nick seemed to be getting a real kick out of showing us what was going on.

It was about a month later when Nick invited us to meet them again, and when
I told him Gail wasn’t interested, he suggested me coming round to see them alone.
At the time I was quite shocked as I thought they really fancied Gail, but it turned out that, Ayanna also fancied me. And during our little conversation, he told me, the reason he let Ayanna play with strangers was because he couldn’t get it up when he was on the molly! He looked quite scary at times because the pupils in his eyes were always really big and he kept repeating himself over and over again that he loved watching guys playing with her.

Later that evening while we were all dancing together, I had a chance to caress her bottom again and realised that she actually wanted me to play with her, letting me hold her butt cheeks and even finger her as we danced. God she was so fucking sexy, I was enjoying it immensely, and it was at that event that Gail eventually succumbed and decided to let them play with us. It was definitely one of my most memorable evenings and incredibly, they were both working on her together. Nick was playing with her tits as Ayanna kissed Gail on the mouth and was stroking her legs. And when Gail opened her legs letting Ayanna slid her hand down into her knickers, she had the most intense orgasm I’d ever seen and during her wild jerking, squirted all over her hand.

It turned Gail on so much, she even let Nick do the same to her again as I finger fucked his wife Ayanna right next to her.