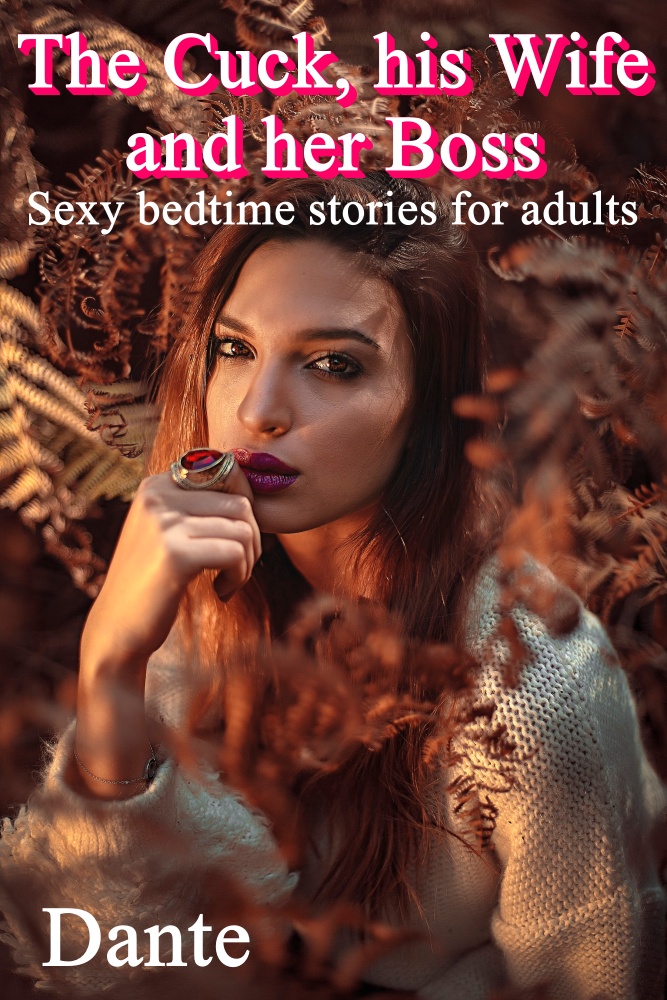 The Cuck, his Wife and her Boss

Direct link here as soon as approved by Amazon

Chapter 3 – On the way to the seminar

Chapter 4 – On the way home

It all started a couple of months ago when she came home from work one evening and told me her boss had come on to her. She said nothing happened as we’d only been married a couple of years and even though, I couldn’t satisfy her in bed,
I know she loved me, and my below average size and premature ejaculation didn’t bother her.

But him flirting with her turned me on so much, I couldn’t stop thinking about it and asked her to tell me exactly what happened. She was a bit reluctant at first, but when I told her, I truly loved her and she saw how quickly I became aroused, she told me all the details and we made love passionately for the first time in over a year. Not that I lasted very long… in fact, I shot my load within the first few minutes, but was able to continue pleasuring her using my mouth and fingers, bringing her off as she also became aroused by telling me what happened.

And now we’re in so deep, she’s bringing him home to sleep in our bed as I lay awake all night in the spare room, listening to her moans and sighs. She leaves the door open slightly so I can hear and peep through the gap and he knows all about me.

I’d better start at the beginning as I’m so turned on and want to write this down. It all started when Kirsty my wife of two years started working at Barclays bank. She’s 23, very attractive and a typical girl next door type with long dark brown hair, sexy size 10 figure and at 5 feet 8 has beautiful long legs. Her bottom and 34 B breasts are perfect and up until this all began, was very reserved and demure.

I’m Greg and slightly older at 28, fairly fit as I enjoy biking and cycle fifteen miles to work everyday. I work in a warehouse and met Kirsty when we were at a local community center, doing a course in alternative health.

So she’s been working at Barclays in St Albans for about six months and told me, a new branch manager had been posted to her bank and started flirting with her. She was quite open about it as she’s been totally faithful, as I am to her. But for whatever reason, like I said, it got me so turned on, I had to know more. She said, whenever nobody else was around, he would always be coming on to her and putting his arm around her shoulder, whispering comments about her looks. She said he’s from Brazil and speaks very good English, well educated and in his late 50’s. Obviously quite successful and drives a Mercedes SL sports.

So on this particular day, she and all the other staff, had to attend a training seminar in London and he’d offered to give her a lift home. She knew he was married so was really surprised when he put his hand on her leg as they were driving down the motorway, saying how sexy she looked and how he had a thing for stockings and pantyhose. She was wearing tights and her skirt was mid thigh, exposing her nylon covered legs. Not wanting to lose her job, she jokingly told him she was married and casually moved his hand away.

I asked her if it turned her on? And her response was, that it did, and she saw him touching his erection as he continued driving. But she stressed that she loved me, and even when he did it again, this time blatantly caressing and squeezing her knee and leg, she moved him away again. She assured me nothing else happened, but realised I was incredibly turned on and we started making love. I couldn’t stop thinking and talking about it and we made love again and again. She asked me how I felt? So I was totally honest and said, in a strange way, it made me love her even more.

A few days later she told me he was still flirting and had even asked her if she wanted a promotion to a different department. The position was apparently double her normal salary and benefited from an end of year bonus of well over fifty grand.
I asked her if he’d touched her again and she admitted he had in his office, this time he’d slipped his hand up her skirt and pulled her towards him grabbing her butt. She was clearly embarrassed, but I assured her it was OK and I really wanted to know what else happened as I was incredibly turned on.

Reaching down she felt my erection, then asked if I really wanted to know what else he did? Hugging her tightly I cupped her bottom under her skirt then led her by the hand towards the bedroom. Laying her on the bed, I pulled my jeans off and she saw my aroused manhood standing to attention, so reached out and started fondling me as I knelt in front of her.

“Well… If you really want to know… he was sitting in his chair and I was standing next to him. He’d just told me about the new position in the loan department and slipped his hand between my legs. I was so taken aback and shocked, my mind was racing on how I was going to get away as he was groping me up my skirt over my tights and knickers. Then he pulled me towards him with his other hand on my bum and as he had a really good feel, I nearly peed myself.”

“My God…! It really turns you on doesn’t it…!” She exclaimed.

“Yes I know, and I get this weird feeling in my stomach and… I can’t explain it but… its like I want you to do it.”

“What do you mean Greg, are you saying you want me to have sex with him…!”

“Well… why not… he’s married and knows your married, so it’ll only be for fun, and you said he was an old guy, so you’re not gonna fall in love with him are you…!”

I pushed her down on the bed and lifted her skirt, parting and diving down between her legs, I could tell she was just as turned on as me and clearly already wet. Pulling her knickers and tights down to her knees, I pushed her legs up and ate her out like a man possessed, pulling her open with my fingers and licking her pink inner lips until she had the most amazing orgasm.

Later that evening we discussed it again and as soon as she told me how he was feeling her up in his office again, I became aroused and we made love properly, but when she told me he’d made her touch his cock as he was exploring between her legs, I fucking lost it and orgasmed again, basically finishing me off for the night.

The following day she came home and said, he’d offered her an ultimatum, either she let him take her to a hotel and spend the afternoon with him or he’d offer the position to someone else. We knew that the double salary and yearly bonus was a life changing opportunity and we could fulfil our dream of moving into a bigger house in a nicer area. And the fact that it was all up front and both knew exactly what was happening, we decided to accept his offer.

On the day she wore her new red and black lace lingerie set with matching suspenders and sheer black stockings, an elegant knee length dress and looked like she was going to an important business meeting. We kissed and hugged and knowing what was going to happen, I took the day off and stayed at home.

She’d promised to tell me everything when she got home, and even call or text me if she could. So all morning I was trying to make myself busy and wondering, how, what, where and a multitude of questions were going through my mind.

Then just after midday she called saying, he’d booked a room at the Holiday Inn on the A5 at Markyate and she was calling me from the rest room. I told her I knew the hotel, loved her like crazy and wished her luck.

Staring at my phone constantly, begging in my mind for her to call or at least send me a text, but it was silent. The tension was driving me crazy and then she sent a text saying, he’d put her in a taxi and she’d be home in ten minutes. A rush of excitement that I cannot describe flowed over me as I rushed downstairs to wait by the front door.

The Cuck, his Wife and her Boss