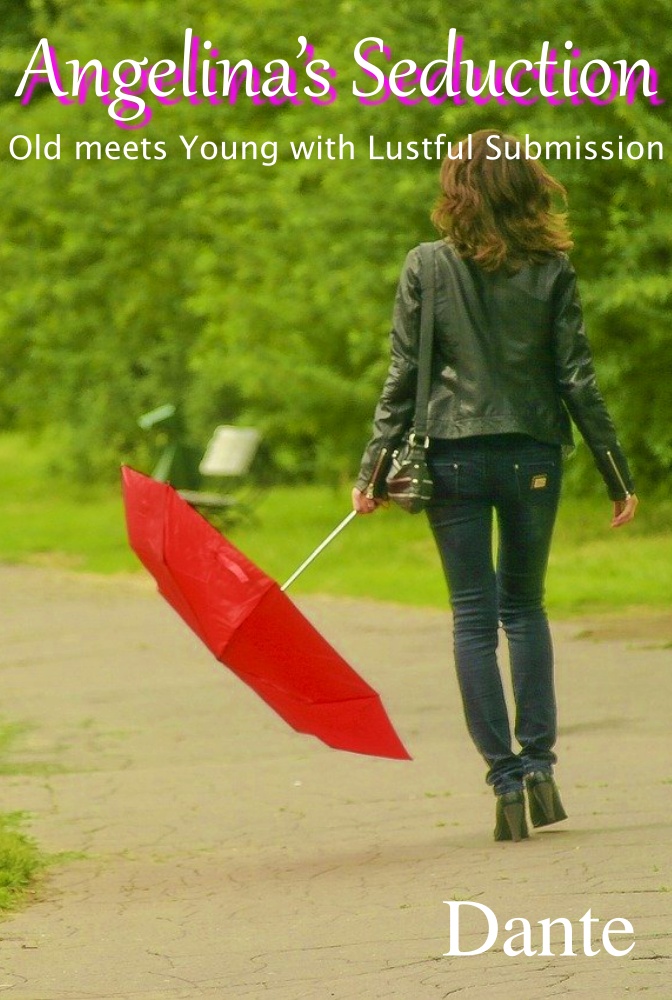 So what made him do it…! I thought we were really happy, our sex life was great, but I knew he wanted more… I woke up in a room on a dirty mattress with a crowd of disgusting, fat old men, wanking in my face and taking turns to fuck me in whatever hole available. Yet I was so turned on I couldn’t wait for the next one to enter me.

The next morning I woke up with him licking between my legs, saying he loved me and he was sorry and asking me if I still loved him?

Of course I did… he was my one and only friend and lover before last night.

I’d never been with anyone else but him… he was older than me, by some 35 years, but he taught me everything I knew about sex… and now he’s moved it on to the next level. He always told me he would when I was ready, but I never suspected he’d do it so soon.

I’m Angelina and we met about a year ago, I was walking through the shopping centre when he stopped me to ask if I was married and if he could buy me a coffee? He said I looked so nice and petite and wanted to know why I was looking so sad.
I told him I’d just been for another interview in a fashion store, and they’d turned me down because I was only 18 and had no experience. Anyway, I was so upset, I burst into tears and he was really kind to me, listening to my story and said that maybe he could help me find a job.

He told me he knew some business owners in the town and would ask them if they would be interested in taking on a new trainee. A few days later, I was offered a job in a hairdressers and it was all down to him. After that, he’d pop in to say hello and we became friends. The owner told me he’d known Dennis for years and he was a really nice guy. He started taking me out to lunch and asking all about my life at home, and eventually asked me to come round his house and that’s when it happened.

We had a few drinks and he told me he was divorced, and a few years ago his wife had fallen in love with another guy, so he told her to leave and go live with him. But while they were together, they enjoyed the swingers lifestyle and often had a girl or guy stay the night. He told me he really enjoyed watching his wife with another guy and how they regularly smoked a spliff or took E’s and went out to pick someone up to bring home.

I was intrigued and asked him more as I’d had such a sheltered life, living with my mum who was a religious fanatic and I’m convinced hated all men. She kept me in after school and wouldn’t let me have any friends, until I hit eighteen and left college and started attending interviews and looking for work.

He said it was hard to explain as I hadn’t had any boyfriend experiences or even drunk alcohol so the best way was to try it for myself. I was so fed up with my mum and restricted life at home, I said OK and told him I wanted to learn all about what boys liked, and was willing for him to be my teacher.

That afternoon he showed me some sexy movies on his computer and started touching me as I sat on his lap. One thing led to another and I was snogging with him as he fingered me to orgasm in his computer chair. He had my boobs out and was sucking my nipples as he rubbed between my legs. I lost count how many times he made me cum, and then he was making me play with his cock. I’d never even seen one before in real life, so initially it looked huge… but after seeing a few videos, I realised he was average and only some guys had really big cocks.