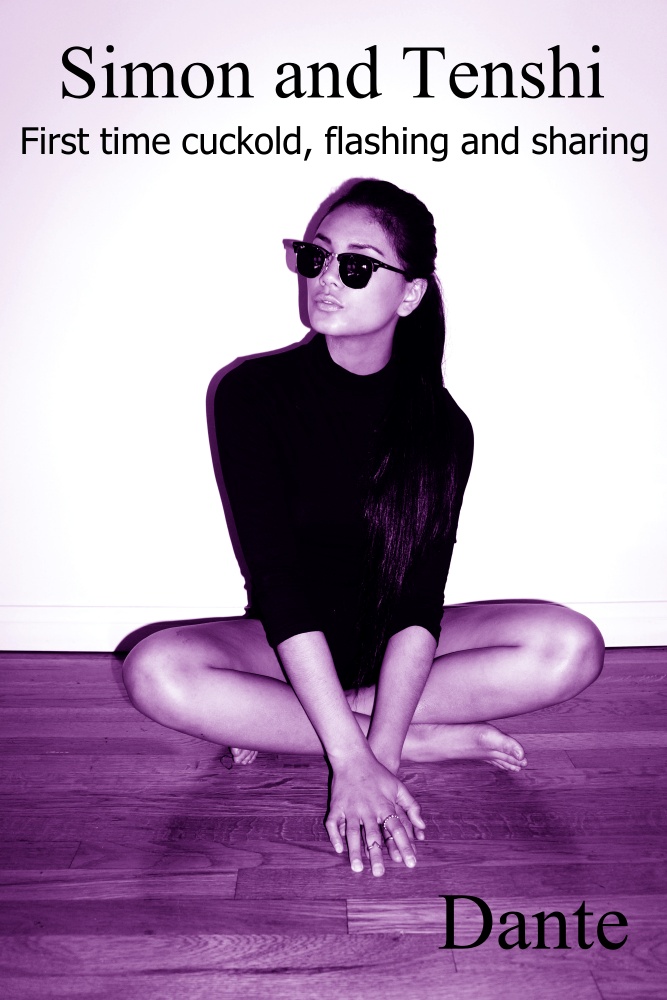 Tenshi was really nervous as we sat there looking around, I had my arm around her and was trying to play with her tits but she wouldn’t let me pull her zip down. It was then we saw a very attractive Asian girl with her partner standing in a corner right next to us.

They were hugging and basically looking around the room like us, I assumed they were also newbies as he gave me a nervous smile. She looked Korean and was quite tall, mid twenties and he was white and looked about my age.

Tenshi was watching as they started kissing, and he was caressing her tits over her dress, but she was nervously trying to hide his hand. It was obviously turning them on being watched so closely, because he turned her towards us, so we could see what he was doing. After a few minutes, he slipped his hand inside her dress and was caressing her bare breast, we could see her long nipple as he eased it out, still kissing her but looking down at Tenshi staring up at them.

I moved my hand up and caressed her tits as she turned her head and we started kissing, just like the couple we were watching. It was so exciting as they were watching me do to Tenshi what he was doing to his partner. I knew it was turning Tenshi on by the way she was eating my face and letting me pull her zip down to get my hand inside her dress.

She just nodded and pulled my head back down to continue snogging. She was also staring at his hand working on her tits, he’d eased her other breast out and caressing them both in turn as his partner looked down at us.

I’d eased her zip down a little more, her breasts were much smaller than the other girls but still a beautiful shape and I could see the guy was impressed when I eased them out.

Tenshi immediately tried to cover herself, but I told her to relax and to just watch. She lowered her arm and let them see her little boobs as I caressed them, him doing the same with his partner.

The guy was transfixed as I worked on her nipples, he slid his hand down and started caressing his partners upper thigh and going higher. He’d pushed her red dress up revealing her lacy black knickers and his hand was rubbing between her legs. She was holding his hand trying to stop him, but he whispered something and they both looked down at me caressing Tenshi exposed breasts.

The guy smiled down at Tenshi as she watched him finger his partner and she was pulling his cock out. Stroking it slowly like Tenshi was doing to me. I could feel her getting wet and eased a finger up the side of her knickers, moaning into my ear as I gently fingered and teased her clit.

Suddenly, the Asian girl dropped to her knees in front of us and took his cock in her mouth, licking around the head and cupping his balls. They were so close we could have touched them, but as we were all so turned on and newbies, we just watched each other.

I couldn’t believe Tenshi was laying there with her legs open, tits out and letting me finger her as they watched.

“Shall we let them sit down…?”

She didn’t answer but I knew she was game, so nodded for the guy to sit next to Tenshi on her other side. He quickly sat down and his partner continued sucking his cock, kneeling on the floor between his legs. She looked up at Tenshi, and then to me, my hand was still between her legs, so I pulled her knickers over exposing her lightly haired pussy to another couple for the first time.

After they left, we also exited the couples room and went to find Terri and Quinn.

That was the very first time we’d seen or done anything like that, and on the way home we couldn’t help playing with each other in the car. Tenshi whispered that Quinn was watching in the mirror. And being watched, seemed to turn her on even more, and when we got home, fucked like rabbits as she kept talking about what we did and saw other couples doing with the single guys.